Coney Island: An unfinished Photo Essay / 1998-2000 is a photo project I worked on while I was a photo researcher at the Black Star Picture Agency. Though I'd given up street photography years earlier, working at a photojournalism-based photo agency made me want to hit the streets again with my camera. I figured Coney Island would be a great theme for a photo essay and spent much time there between 1998 and 2000.

After about two years, the trip from my home in the Kingsbridge neighborhood of The Bronx to Coney Island was getting a bit tiresome. Plus, I would soon discover a new idea for a long term photo project: documenting the remnants of old growth forests within New York City.

In retrospect, it was great fun photographing Coney Island. I generally photographed whatever caught my eye rather than focusing on a particular theme. I now see these photographs as a document of the area surrounding the amusement park that would eventually undergo extensive redevelopment.

Ever since I was a child growing up in Pittsburgh, I'd heard about Coney Island in books, movies and songs. One song that really struck me was Lou Reed’s ”Coney Island Baby." This collection of photographs is dedicated to the late Lou Reed. 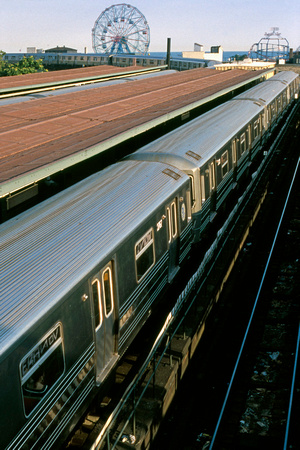