Patrick Kenny first opened Kenny's Castaway's in 1967 on East 84th Street and moved to the Greenwich Village location in the 1970's. Over the years the club's entertainment lineup included many legendary acts. Some of these included: The New York Dolls (first gig outside of the Mercer Arts Center); Bruce Springsteen (booked for a week in what would be the first ever New York City show of the E-Street Band in 1973); Blondie; David Johansen; Phish; Kiss, Muddy Waters; Willie Dixon; Buddy Guy; Patti Smith and Aerosmith to name a few of the more famous acts. The club also has served as a starting point for many a bands' first NYC appearance and has booked a wide range of musical styles including Rock and Blues, Folk, Acid Jazz, Alternative, Reggae and Rhythm & Blues. Kenny's Castaways closed on October 1, 2012.

Kenny's Castaways was the first New York City bar I ever got drunk in. It was sort of like a magnetic force that pulled me into the joint. I ordered a beer and looked up at a small sign above the bar with an excerpt from the Tom Robbins book Even Cowgirls Get The Blues. "...a bat fluttered out of the cave, took one radar reading and headed for Kenny's Castaways." I felt just like that bat!

Though the bar was known for it's nightlife, my time at Kenny's Castaways was Saturday afternoons after spending the morning photographing the city streets. Whenever I visited Kenny's Castaways it was assured I'd run into someone to hang out with that had a similar interest in Beat Literature, music, photography or was simply influenced in some way by the 1960's counter culture. I was working at the time as a darkroom printer to support my photographic endeavors. At Kenny's, I'd often run into similar people who also worked darkroom jobs to support their photographic interests. What a great bar! 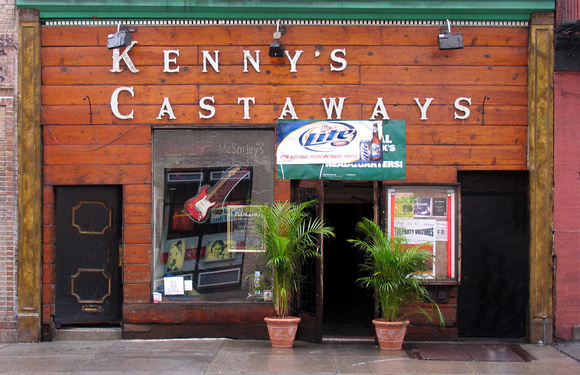